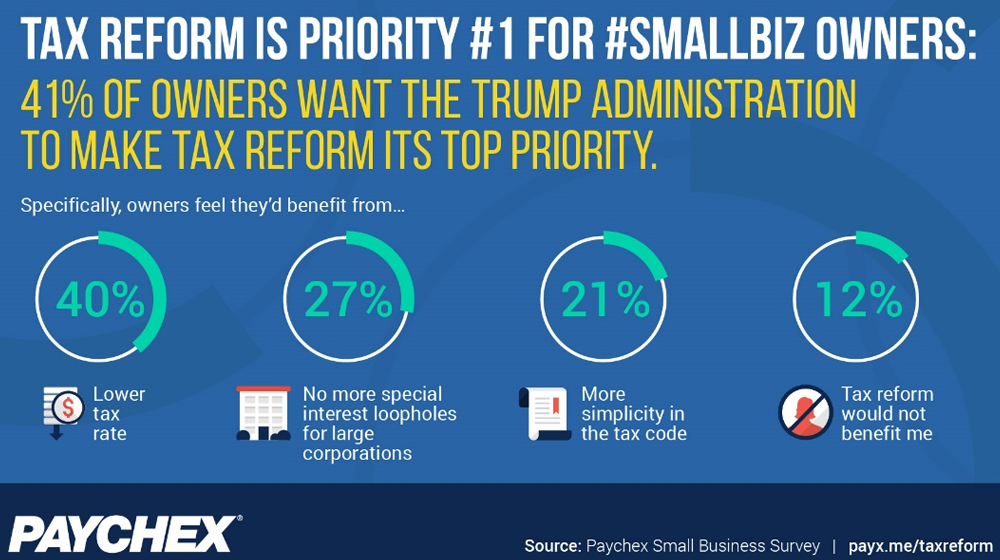 When Republicans in the House of Representatives today release their version of a tax reduction or tax reform bill, small business owners across the country are watching from near.

According to new data from Paychex (NASDAQ: PAYX), 41 percent of all recently surveyed small business owners say that tax reform should be the top priority of President Donald Trump's administration. The data reveals that it is the most important problem for small business owners.

Nearly half of small business owners want tax reform first, before anything else

"President Trump has kept the promise of creating a more business-friendly environment Our data shows that businesses view tax code changes as a top priority, and look forward to any reforms that may occur in the next few years. months, "said Martin Mucci, President and CEO of Paychex.

Small business owners therefore seem to believe that tax reform should be given higher priority than any other issues raised in the Paychex Small Business Survey conducted in late August. Among other issues that small business owners feel Trump and Congress should also focus on the Affordable Care Act / Obamacare (15 percent), infrastructure projects (15 percent), and the reduction of regulations (9 per cent).

A tax invoice for Christmas?

President Trump said he wants to sign a new tax reform bill before Christmas this year. It has made arbitrary deadlines in the past that the Congress has failed to respect. The most notable among them has been the inability to adopt a repeal of the Obamacare legislation.

Trump tweeted this message Tuesday, before Republican legislation was introduced: "The members of the Republican House are working hard (and late) at the massive tax cuts that they know you deserve. they will be the greatest ever! "

The members of the Republican House work hard (and late) at the massive tax cuts that they know you deserve. These will be the biggest ever!

According to the Paychex study, it seems that Trump is right to suggest that tax cuts (or a lower tax rate) should be the first priority of any tax reform program from the point of view of small entrepreneurs.

Of those who say tax reform is the first priority, 40% say the reform project should have a lower tax rate than all else. The most important priority of the tax bill should be to eliminate the "loopholes" that favor large corporations over small businesses.

Twenty-one percent say the tax bill should simplify the tax code more than anything else. And 12% of all respondents say that a tax reform project would have no impact on them.

To obtain this data, Paychex interviewed 341 "directors" of small businesses across the country. The company says that not all respondents were Paychex customers.