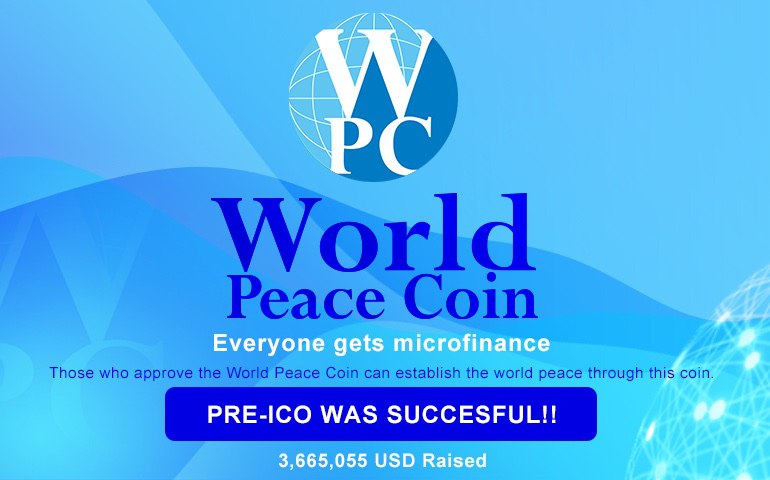 What are we talking about?

Today we will talk about one exciting project. WorldPeaceCoin the name of this project. Briefly, the essence of this project based on the blockchain is that the fact that you are financing impoverished people in developing countries. And from the investor’s point of view, it will be possible to enter the microfinance business. The team plans to implement this with WPC.

It allows you the real-time settlement with a low remittance charge. The maximum amount of WPC is set at 2.5 billion, and we will donate 10% of them which is equivalent to 250 million to developing countries.

WPC contributes to creating opportunities for people who have neither bank accounts nor access to financial services.Furthermore, it utilizes its artificial intelligence (AI) system called “TSUMUGI” which calculates the credentials of the WPC owners to mine while financing. PoL is WPC’s original way of mining. Anyone who has WPC can be a miner. This is the revolutionary way of mining.

That means the WPC provides opportunities for people who need to analyze their credit scores.

Original Credit Scoring. To minimize the credit default of the WPC in the developed countries, TSUMUGI calculates credit scores of people in developing countries with its formula. The credit scores of them had been unclear because they have no access to any financial services.

The analysis is done by deep learning based on the following four resources:

2. The algorithm with statistics got by combining various data like areas

All loans are realized through a dedicated wallet. However, the loan limit and interest rate of borrowers are restricted by setting their credit scores.

With PoL, users do not send or receive money directly each other. Instead, users in developed countries send it to TSUMUGI as a mother wallet automatically for PoL implementation, and TSUMUGI distributes and sends it to users in developing countries according to their credit scores and loan applications. WPC is a new way to change the world.

Soon the 3rd stage of ICO starts with an 8% bonus. I recommend that you hurry to participate. The project promises to be successful.