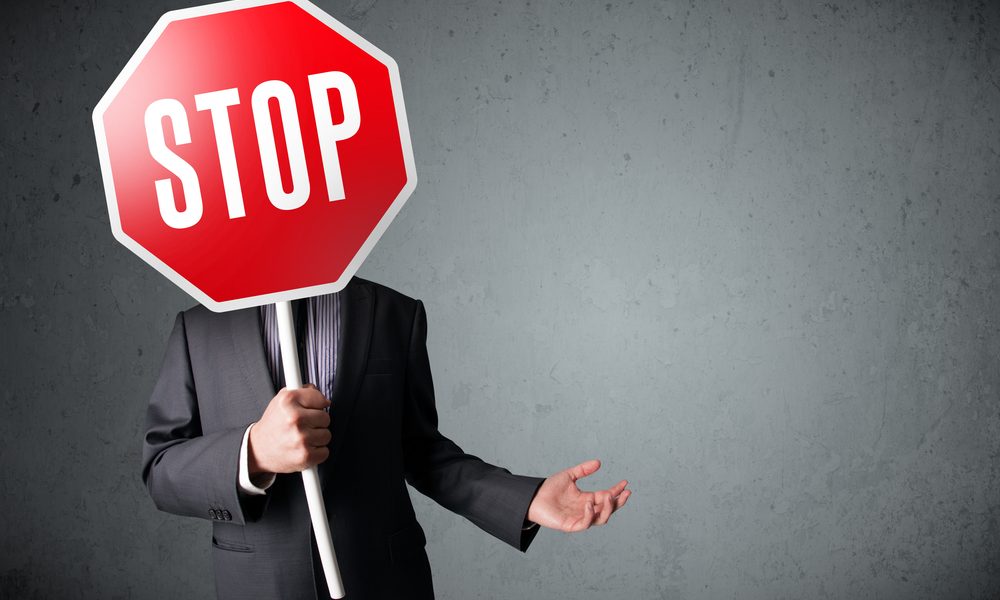 Bitcoin was once again at the center of attention as the most valuable coin reached a new historical record on Sunday, but has now fallen back to the $ 6,000 level. Bullish rumors in China are boosting the segment today, but with a clearly overbought long-term picture, the short-term bullish trend could be in jeopardy in the coming days. The negative divergence of the MACD indicator also points to a downward trend, and investors who still hold major positions should keep their stops tight now. Support levels are near $ 5800, $ 5,400, and around the $ 5,000 level.

The Altcoins were less volatile than the BTC, and although they mostly followed the Bitcoin, the majority of major plays has changed little since Friday. Ethereum remains above the $ 300 level while remaining in a long trading range, while Ripple is still trading near $ 0.20 support. Ethereum Classic is the positive surprise of the session, as the previously weaker piece shows relative strength as it consolidates just below the key support. As the long term remains positive for the segment in general, let's see what the short-term charts look like. 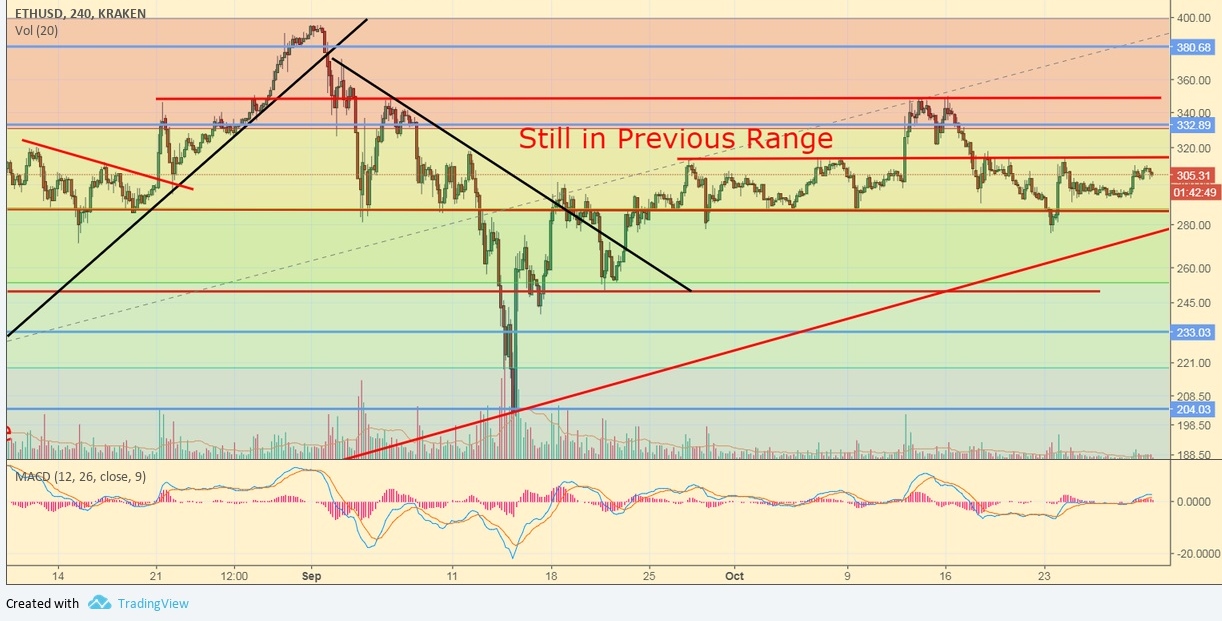 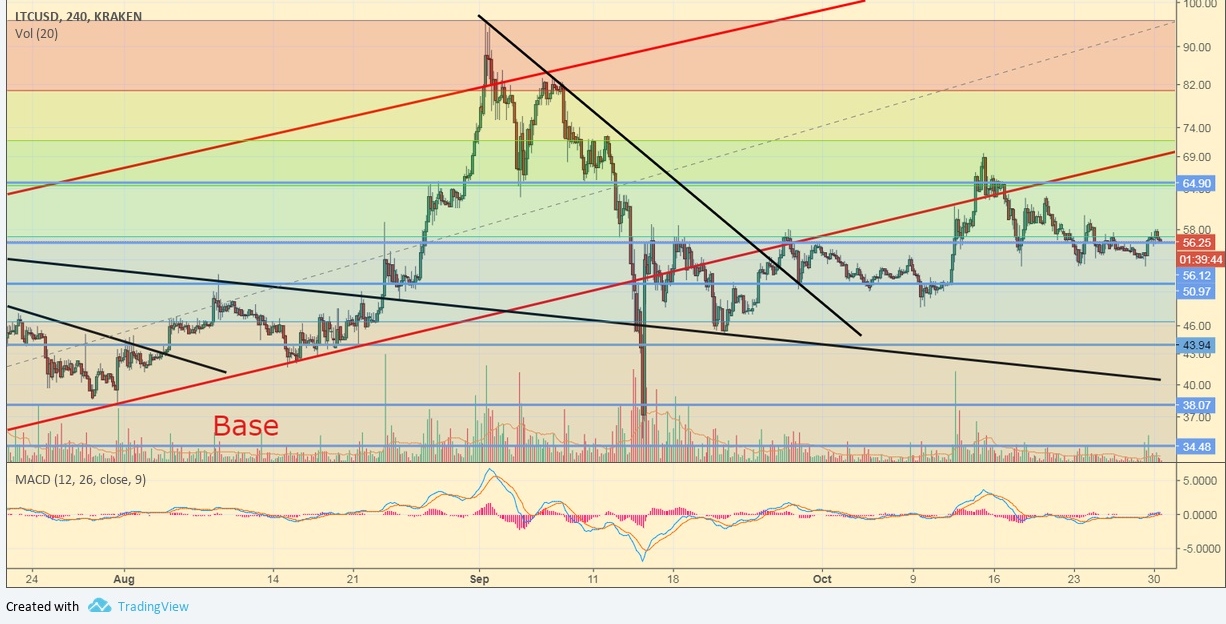 Litecoin is still one of the least volatile majors as it continues to hover around the $ 56 level, while trading in a bullish consolidation pattern. High levels of support are still at $ 53, $ 51 and $ 44, but we anticipate a move above the current range over the coming week, as the long-term situation is encouraging while the current one is encouraging. momentum is neutral. Targets for a bullish move are $ 64 and $ 75 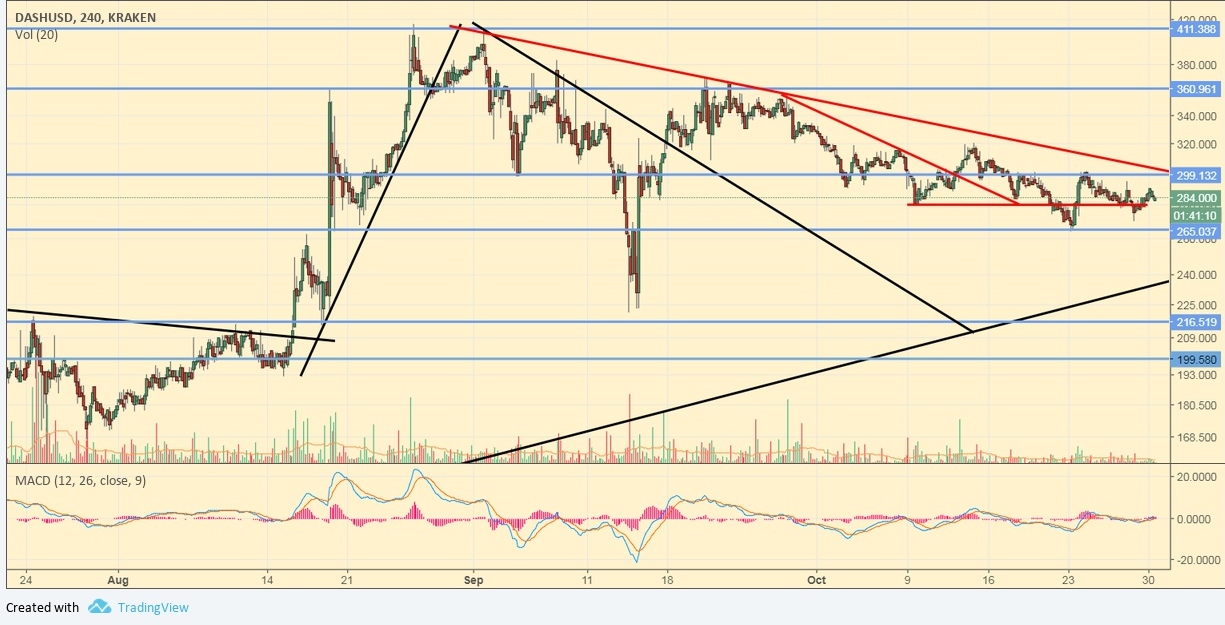 Dash is also trading in a low volatility range, just like Litecoin, and the coin is also among the relatively strong majors in terms of the long-term situation. The currency is heading towards a confluence zone of the short-term downtrend line and support of $ 285, and we expect it to resume the long-term uptrend soon. Dash is facing strong resistance at $ 300, $ 330 and $ 360, while main support stands at nearly $ 265. 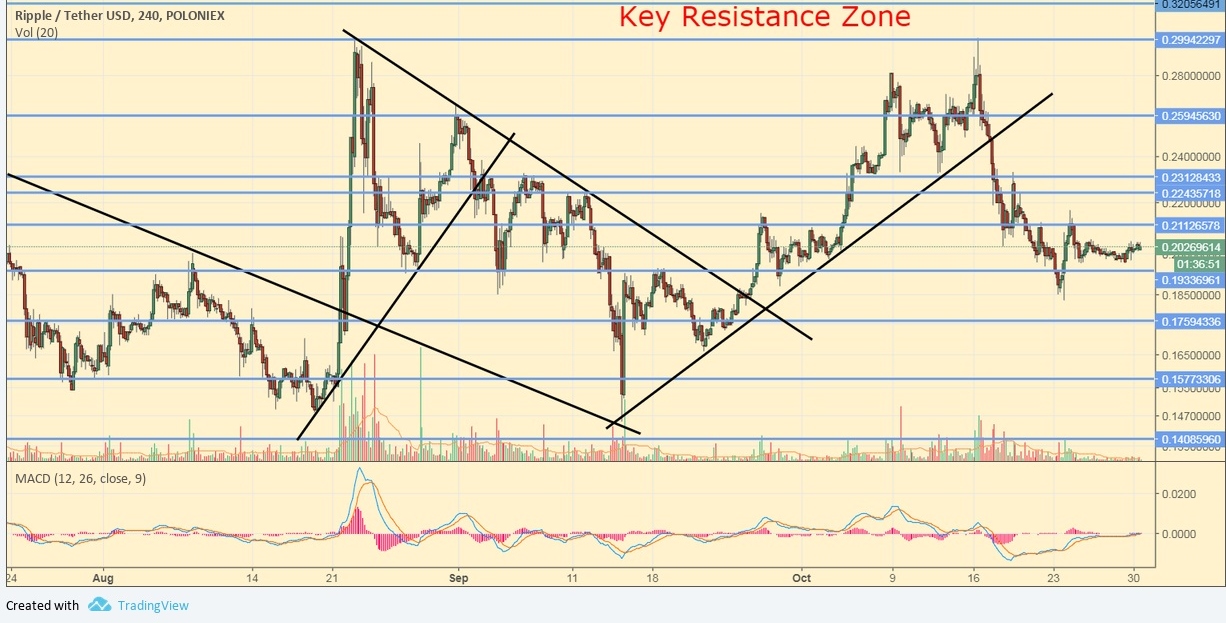 Ripple shows some vigor after being established after a volatile drop of nearly $ 0.20. The coin is still trading inside a long-term trading range, while the $ 0.30 level has still halted the rally, while the short-term setup is improving. gradually. Short-term traders should always wait to open new positions, with resistance zones above the current range around $ 22.50 and $ 0.26 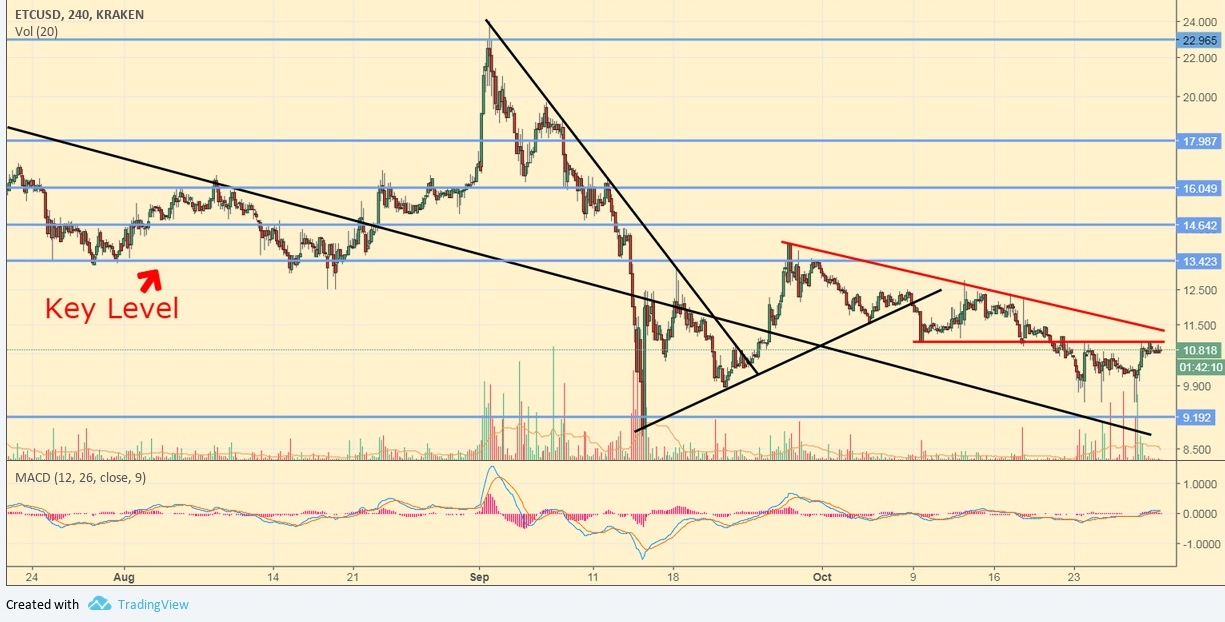 Ethereum Classic is optimistic in the short term, but the coin remains stuck in a downtrend, while facing several levels of resistance. The price level of $ 11 is the main hurdle, the short-term downtrend line being very close too. Short-term traders could exceed $ 11 in the next few days, while long-term investors should keep an eye on the resistance zone around $ 13.50 for bullish confirmation.

See also  Bitcoin "Keep me awake at night": Governor of the Bank of Canada 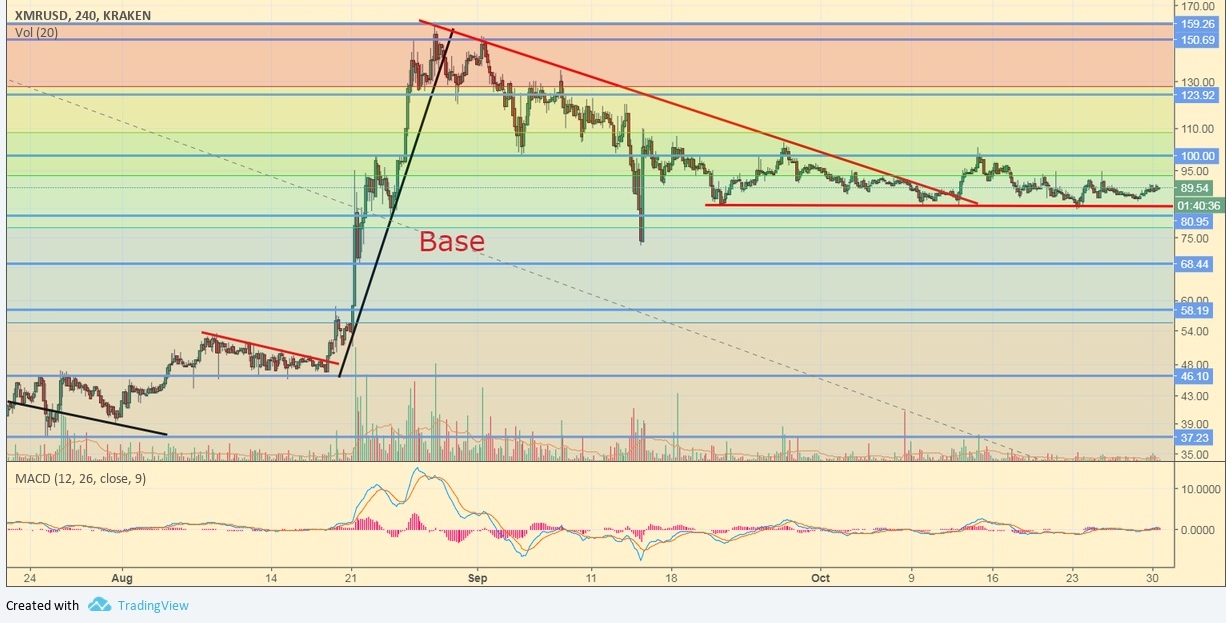 Monero has been the lowest volatility in recent days as the coin is trading near the middle of the long trading range that has developed after the September crash. While we are still expecting a side price action, the compression of volatility suggests a break, while the long-term picture is clearly bullish. Primary resistance is ahead at $ 100, with other targets at $ 125 and close to $ 150. 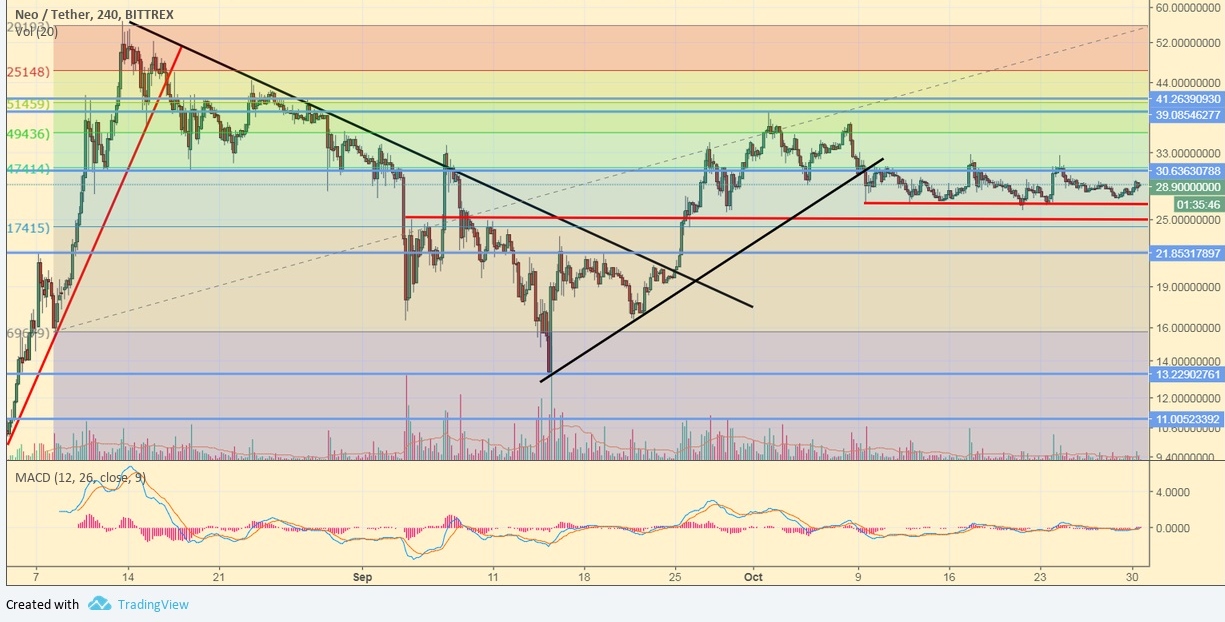 NEO is still trading between $ 27 and $ 30, while the coin continues to consolidate the post-crash spurt that broke through the $ 40 mark in early October. We expect the currency to re-test this zone in the coming weeks, and a move above $ 30 could be imminent. Under $ 27, a strong support is at $ 25 and almost $ 22. 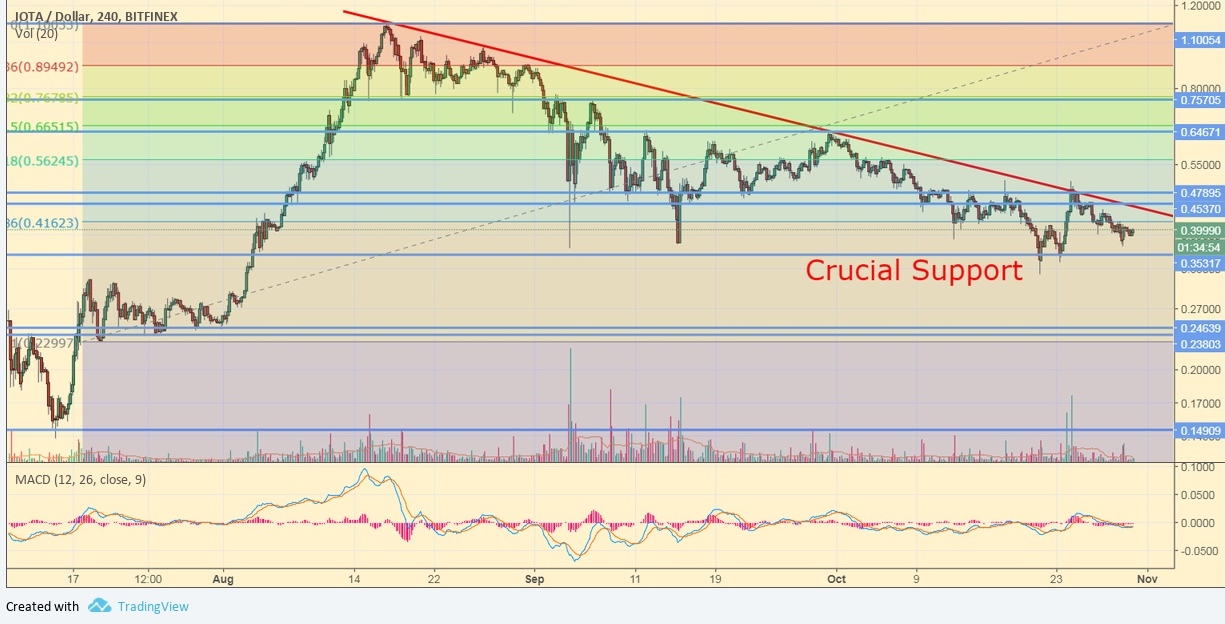 IOTA continues its downward trend despite the encouraging recovery of last week, but the coin is not far from the mainstream trend line. Short-term traders should always wait for an exit from the trend, while investors could still add to their positions here. Primary resistance is ahead in the $ 0.45 to $ 0.48 range, with other targets at $ 0.56 and $ 0.64, and crucial support at $ 0.35.

(+) Update of the OIC: FLIXXO
The Bitcoin price reaches a new historical high at $ 8,668, led by Japan and South Korea
The co-founder of HelloFresh works on a meal service prepared for children
Advertisements
See also  Entrepreneur First Enterprise Builder Expands to Berlin
-- Advertisements --