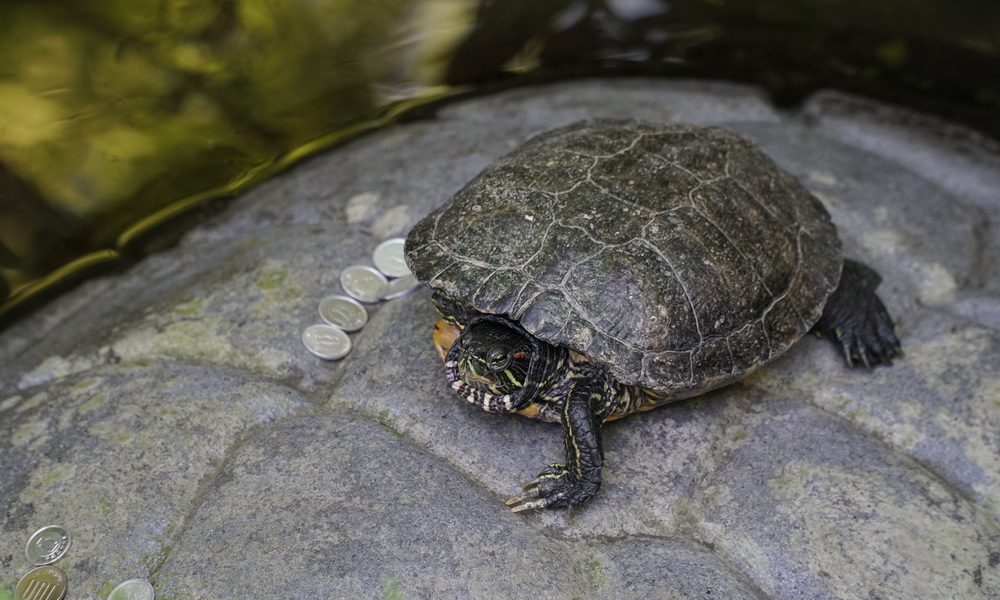 Transaction volume was again focused on Bitcoin and Bitcoin Cash, with altcoins typically traded with low volatility and muted volumes. The most valuable coin has been removed from the peaks of yesterday as it failed to sustainably recover the $ 6,000 mark despite the strong recovery. As the currency slipped, its dominance fell slightly to 57%, even the altcoins stagnated.

The trend is up in the short term, and although the risks of correction remain high, a new push to new heights is possible. Data on the long-term dynamics of overactivity still suggest that investors should be patient, as more favorable buying points should appear in the coming weeks. Support levels are below the current price near the $ 5,400 level, at $ 5,000, and close to $ 4,650.

Ethereum continues to trade in a close range near the $ 300 level today, which has determined the trend of altcoins, with majors remaining unchanged. A slight negative trend is apparent among majors, but aside from IOTA none of the larger coins covers significant ground. IOTA remained the most volatile, but it recovered most of its early losses and remains positive with regard to the long-term situation. Let's see what the most exchanged altcoins look like before the weekend. 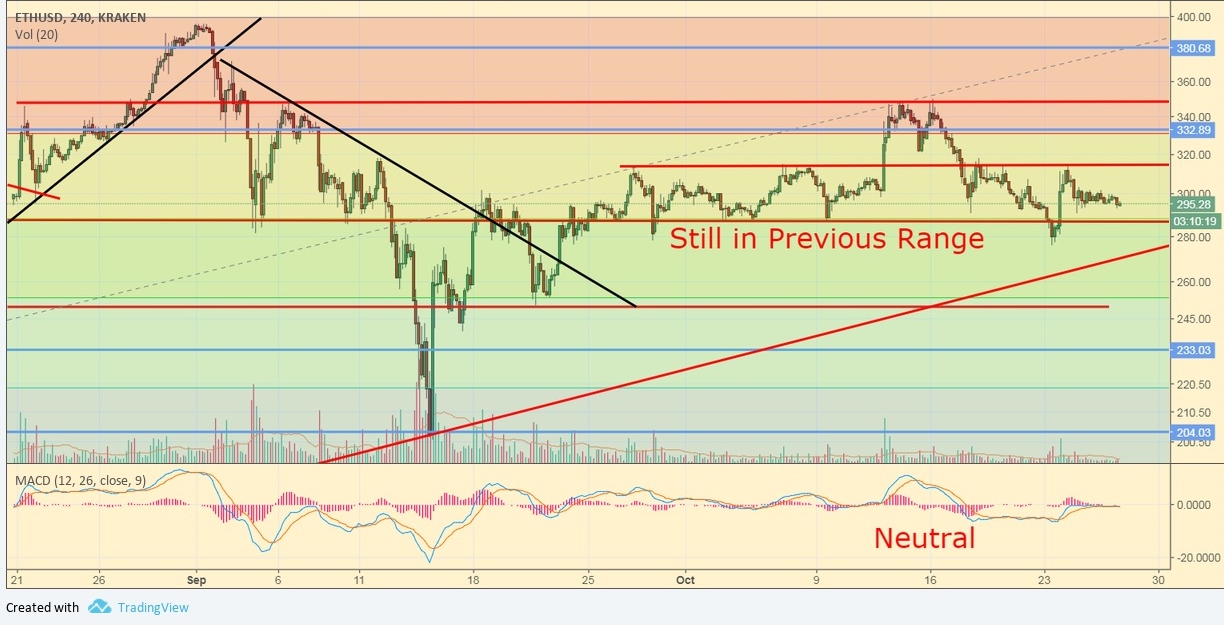 The technical configuration remains unchanged for Ethereum because the long-term uptrend is intact, but in the short term, a neutral range remains dominant. With the high level of $ 285 supporting the token price, a move above the $ 315 level is more likely over the coming period, and we still expect the long-term trend to prevail. Additional support is found at $ 250, while resistance is in advance between $ 330 and $ 350 and nearly $ 380.

See also  Bitcoin will lead to the rise of state crypto-currencies: the CEO of Citigroup 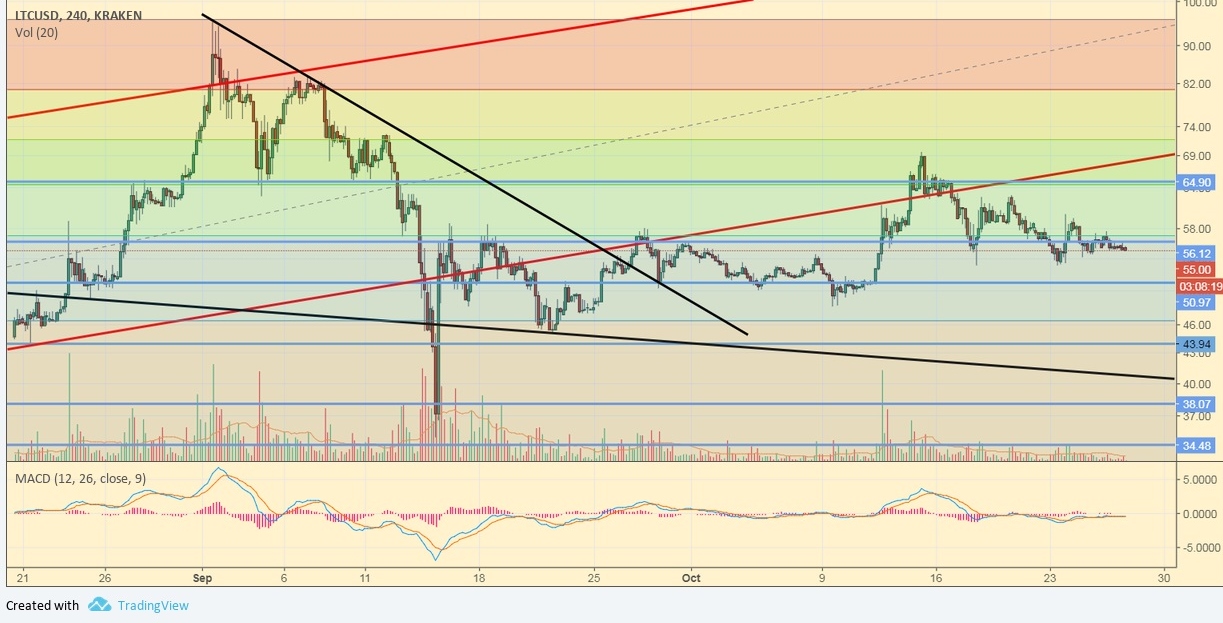 Litecoin returned most of yesterday's earnings, but remains stuck at the $ 56 support / resistance level, in a bullish consolidation pattern. The next major move is still likely to be bullish and the coin should test the $ 64 in the coming weeks. Support levels are still found at $ 53, $ 51 and $ 44, while over $ 64, the next target is the $ 75 price level. 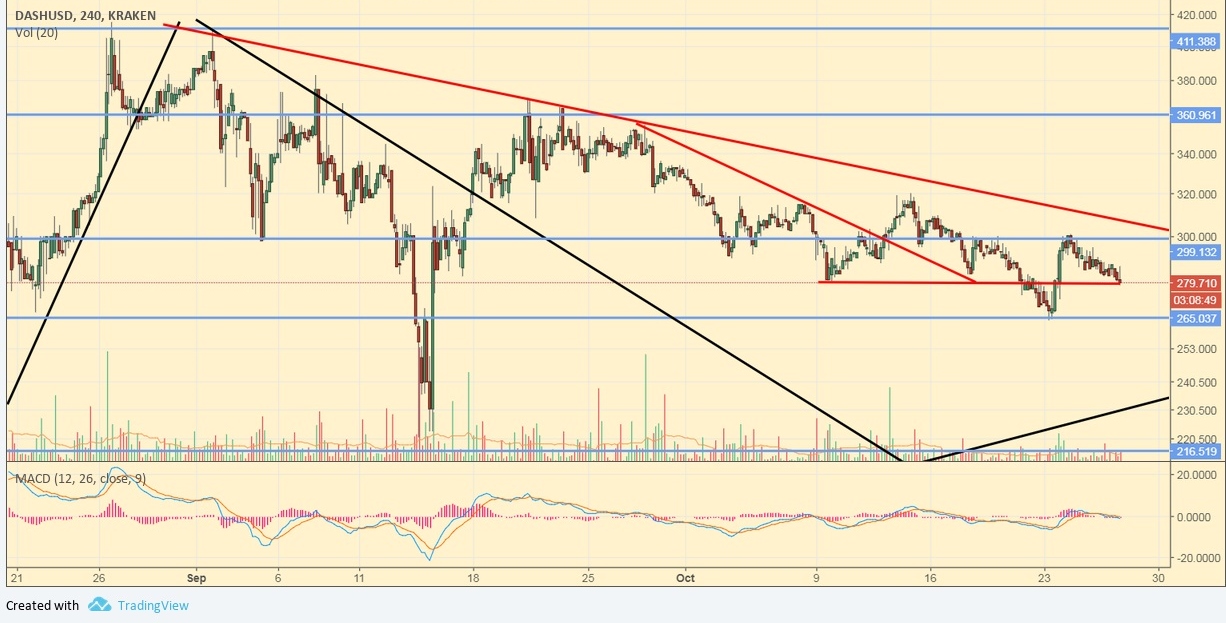 Dash is still among the weakest parts regarding the short-term picture, but the long-term uptrend is still intact, despite the recent test of the $ 265 level. A move below this level would warn of another weakness, but we expect the uptrend to resume, with a move above $ 300, toward the $ 330 resistance 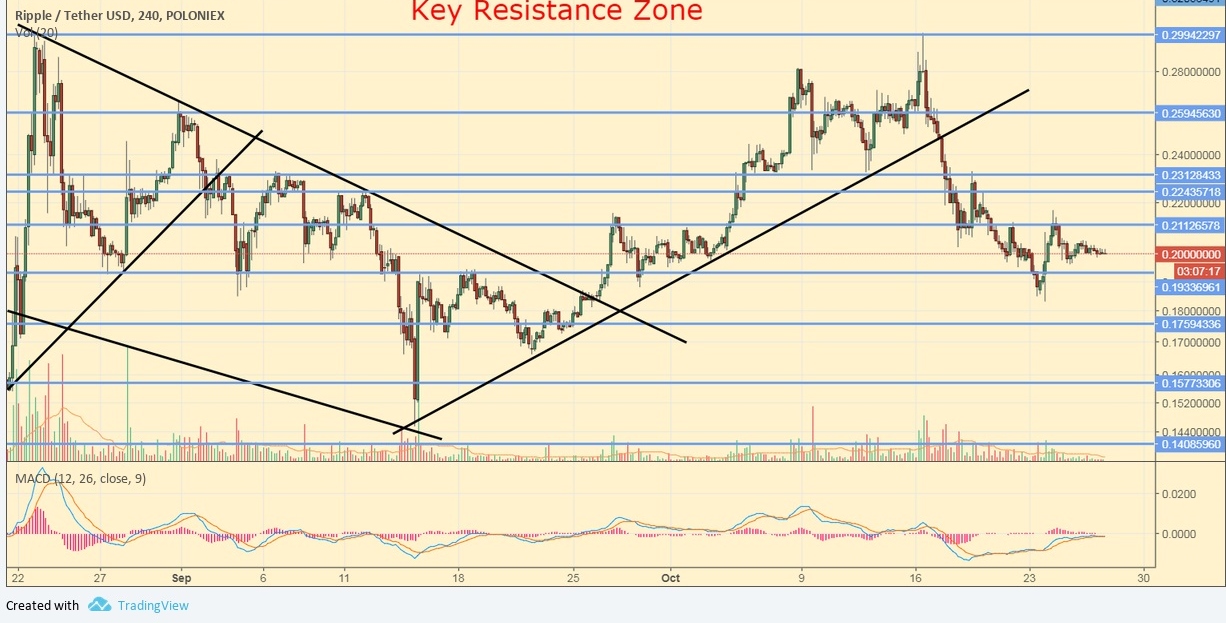 The volatility of XRP has plummeted today, as the coin continues to trade near the $ 0.20 level, still in a short-term downtrend. The currency remains bullish in a long-term perspective, but short-term traders should wait for a breakout before entering new positions. Support levels are still near $ 0.18 and $ 0.16, while resistance is ahead around $ 0.22 and close to $ 0.26. 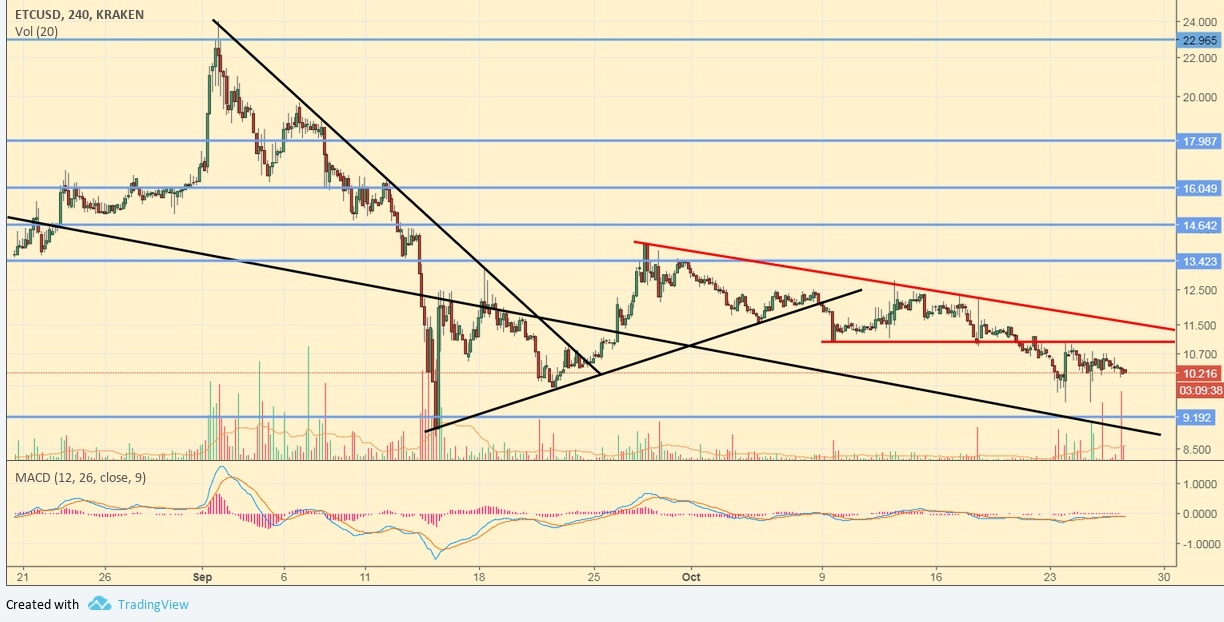 Ethereum Classic drifts down today, and the coin remains the weakest in terms of the long-term situation, with the short-term trend being negative as well. The short-term resistance at $ 11 is well above the current price, and another $ 9 level test is likely over the coming period. Although the long-term setup is neutral, traders should stay away from new positions, with strong resistance at $ 12.50 and around the $ 13.50 level. 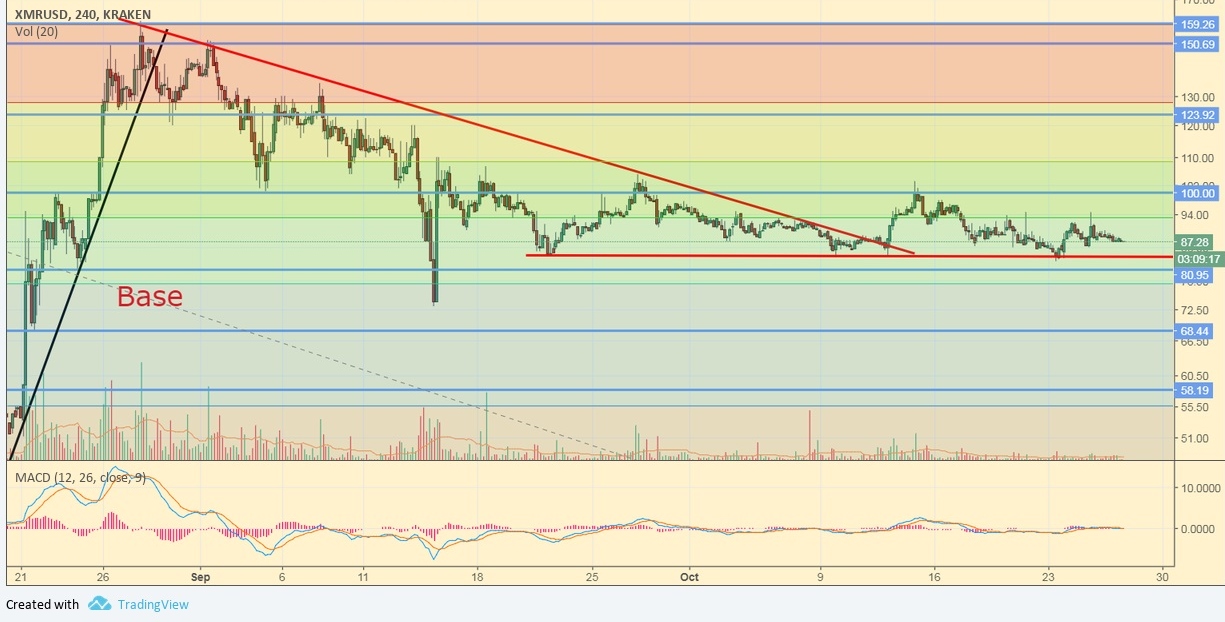 Monero has also lost ground today, but compared to ETC, it is in a much better position in the short and long term, well above the main support level. The currency remains in the dominant trading range between $ 80 and $ 100, with a positive long-term outlook. The main resistance is still $ 125, while the additional support is $ 68. 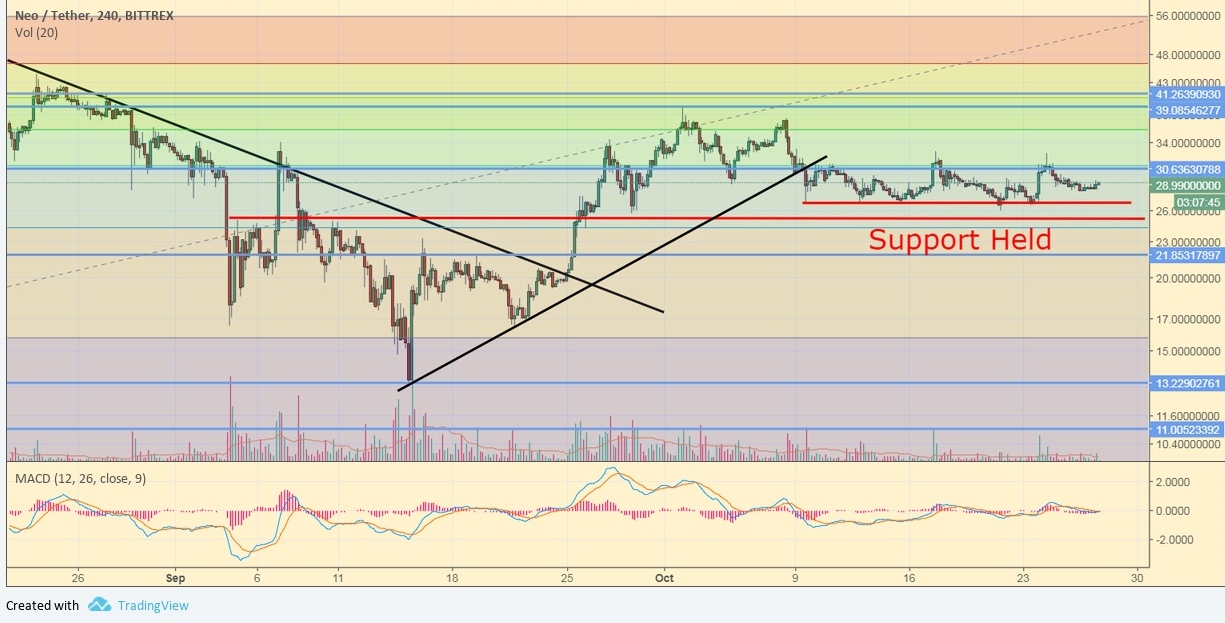 NEO has shown strength today, and although it remains below the key level of $ 30, the recent low volatility consolidation is a bullish sign. Resistance levels are still leading at $ 34 and $ 40, while support stands at $ 27 and $ 25. 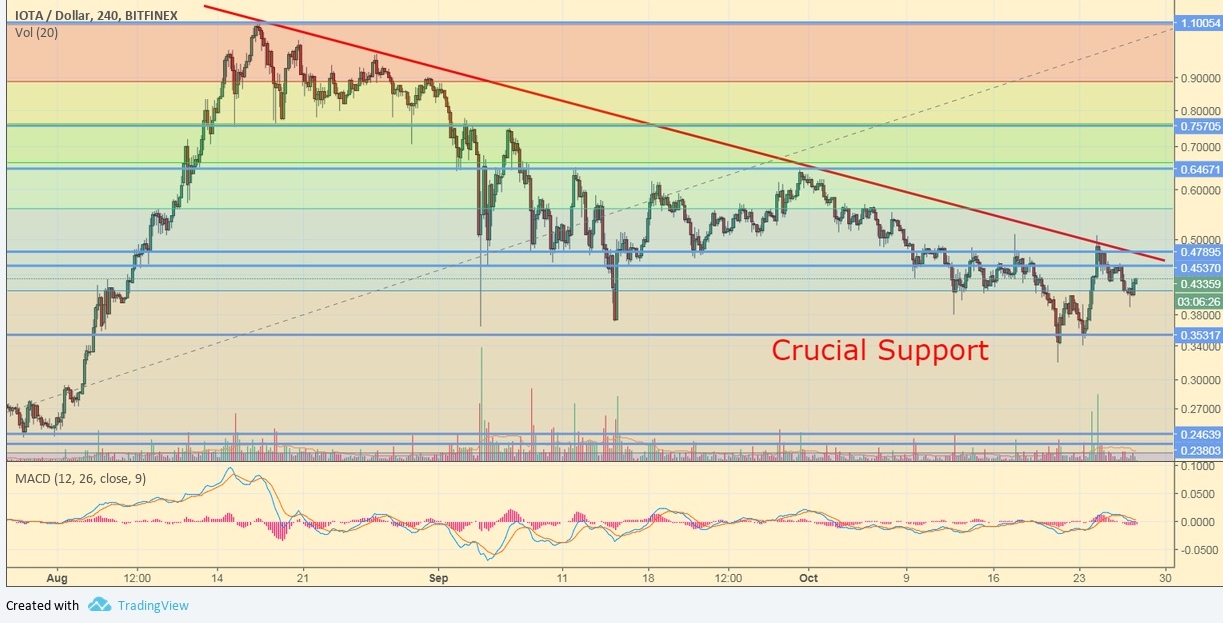 IOTA remains among the strongest pieces in relation to the short-term situation despite the decline of today, as it retains most of its gains early in the week . The long-term situation is still encouraging, and after rebounding on the $ 0.35 key support, the chip should be above the crucial $ 0.45 to $ 0.48 zone, near target levels. $ 0.56 and $ 0.64.

How can traditional tools secure and speed up blockchains?
Unbabel raises $ 23 million for its AI-powered, human-refined translation platform
Ripple Mania: How big is the cryptocurrency of bankers?
Advertisements