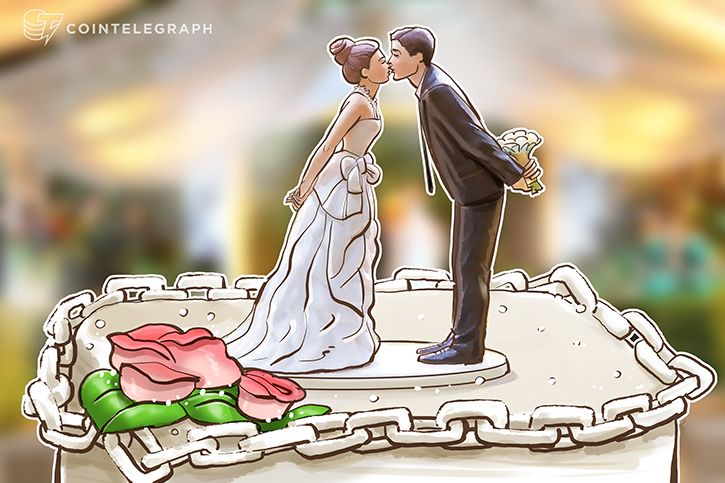 Smart contracts have brought the Blockchain closer to real life. Once the smart contract is signed, it is submitted for permanent storage as a secure record. This permanence has led to the development of a number of services that allow marriage and the marriage contract on the Blockchain

The first marriage was recorded in Blockchain's public registry on Oct. 5, 2014. The wedding of David Mondrus and Joyce Bayo took place at a Bitcoin private conference at Disney World in Orlando, Florida. To legalize the marriage, the couple had to scan and confirm the QR code, which was then written directly to the Bitcoin Blockchain. The oath of the newlyweds was:

"Life is not eternal and death can separate us, but the Blockchain is forever."

Another example of a registered marriage on Blockchain is Bitcoin activist Oles Slobodenyuk and Irina Dukhnovskaya on July 17, 2016. When of the celebration, the presenter recorded a marriage certificate in the Weddingbook.io platform on a Blockchain

The site uses the capabilities of Cryptograffiti, a web service that allows people to encode hidden messages in the Bitcoin Blockchain using a special online interface. It is possible not only to save the marriage certificate permanently, but also to keep a witness list and wedding vows on a Blockchain.

Despite the fact that not all marriages are successful, developers are planning a growing number of weddings. registered on Blockchains. Some platforms help couples not only to register a marriage but also to prescribe the conditions of family life in the marriage contract.

IT developers Gaurang Torvekar and Sayalee Kaluskar sign the first and most famous marriage contract on the Blockchain in 2016. The couple has uploaded the marriage contract template to the cloud-based file solution and digitally signed using the Attores platform based on the Ethereum

The Prenup With Love Agreement states the conditions for cohabitation . For example, the frequency of purchases, the amount of chores done at home, how much time should be spent at night meetings, what series they will watch and so on.

The contract was activated after both parties sent a coded message from their IP addresses, which was reflected in the smart contract. This contract has an open code and all newlyweds can use it. It should be noted that these contracts do not yet have legal force. The newlyweds commented on their decision as follows:

"Speaking of the Blockchain and its infinite possibilities, we decided to use it to solve family problems."

The first marriage in Russia contracted with the help of the Blockchain system was registered in October 2017.

Vassily Lifanovsky and Alla Tkachenko combined their crypto-savings into a single family budget, this procedure was performed on MyWish Platform , aimed at managing cryptocurrency assets in various life situations, including during marriage.

The idea and implementation of this agreement are significantly Different from the agreement Prenup With Love.The marriage contract on MyWish is that the couple's savings will be combined by a smart contract, where they can transfer funds in the future.In case of termination of the contract, all the funds stored on the wallet will be divided in two.To cancel the termination of the contract will be awarded three months, in the case of a reckless decision.In the event of death of a party, the funds will will be transferred to the account of the heir or the spouse. The husband explains:

"When I discovered the Blockchain, I was struck by the thought that a certain network was created on existing economic institutions, that we influence ourselves so much that I have decided not only to be part of the imminent future, but also to influence it to create my family I want to make sure that our finances are protected against various circumstances. "

Getting Ready For Divorce

Aside from the existing platforms that allow for a marriage now, new projects for married couples are also expected. For example, in June 2017 on the Skolkovo Hackathon forum, the Moscow team Evolve Team presented a new draft of marriage contracts on Blockchain, the wedding chain. This project form includes a registration desk, marriage contracts and family budget management. The financial component of Wedding Chain will keep money on a smart contract, manage it by mutual consent and divide the funds accumulated during the divorce. Now this project is under construction

Aside from the romantic motives of eternal marriage on the Blockchain, smart contracts have a completely pragmatic function. Unfortunately, statistics show that the divorce rate varies from 40 to 50 percent of marriages. Smart contracts will help minimize the demands of energy on divorce.

Certain conditions may be prescribed to allow automatic divorce proceedings. These contracts do not require the participation of a notary by making the whole process more cost effective and streamlined. Smart contracts can also facilitate the process of a divorce settlement.

It is quite possible that the law adopts the contact of weddings on the Blockchain. This could reduce the cost of divorcees and ease the burden on courts and registrars. It is becoming clear that smart contracts are the most practical form for marriage contracts. In this context, it can be assumed that following the platforms listed, there will be a whole series of projects devoted to this subject.