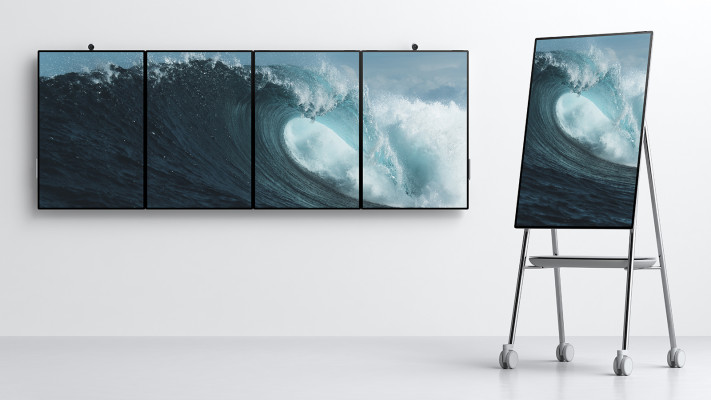 Do you remember the Surface Hub? Chances are you forgot that it even existed. And yet, Microsoft has just announced a second version of the Surface Hub. The company has not shared specs or pricing, but it will not be available until 2019 – selected customers will test Surface Hub 2 from this year.

The Surface Hub was a crazy digital whiteboard that could handle anything from video conferences to documentary collaboration. Microsoft says 5,000 companies use Surface Hubs, including half of the Fortune 100 companies.

It is not known if each company bought a Surface Hub or a thousand. But it seems that there was enough interest to work on a second version. Basically, it's still a gigantic touch screen. It runs on Windows 10 and supports the Surface Pen.

Compared to the previous version, Microsoft has significantly reduced the glasses. It now looks like a modern TV, but with an aspect ratio of 3: 2. Surprisingly, the video camera is now gone from the main camera. You need to plug a webcam over the screen to start the video conferences.

The most interesting part is the video concept. You can see a device with cases of use of fluids. You can hang it on a wall, you can put it on a rolling case, you can create a wall of Surface Hubs.

Users connect by putting their finger on the fingerprint sensor. This way you can find all your documents and data and accept calls from your account.

Microsoft is trying to push the needle when it comes to computers. This is an innovative form factor that could well integrate into your company's workflow. It's interesting to see that the company does not stay still. The Mac has not changed dramatically while Microsoft still has some bold ideas to share.