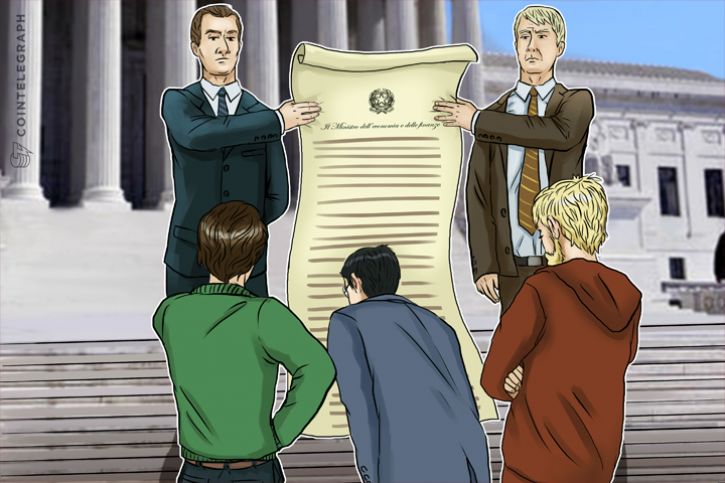 Cointelegraph analyzed the draft of the document which aims to introduce new regulations on the use of crypto-currencies in Italy and spoke of the new decree with representatives of the local business, political and academic circles.

We have seen a harsh approach and pr ohibitionist China, which aims to strongly control the phenomenon, but also a more reasonable approach of the United States, Japan and Switzerland, whose goal is to create a solid foundation for the future development of the 39; industry.

Member of the Innovation Committee of the University of Ca 'Foscari and the Ascotrade pole of innovation, Renzo Taffarello commented why the regulations are developing in 2018:

"These decrees are made in this historical period because 1) we saw the increase in Bitcoin value that led to large asset increases" associated with Bitcoin, 2) the appearance of many ICOs who see Startup capitalized, 3) the fact that the use of Bitcoins is entering the traditional economy. 4) finally, the assumption that cryptocurrencies can be used for illicit purposes since they are outside national jurisdictions. "

In this disarray of laws, decrees and confused declarations, there is also Italy.The Ministry of Economy and Finance, in the press release no 22 published on February 2, declared his commitment to "understand the phenomenon of cryptocurrency in Italy in all its aspects."

"Many compare the phenomenon of cryptocurrencies to other recent speculative bubbles. But, in my opinion, there is a substantial error: cryptocurrencies are a clear "system" answer at the time of supposedly overcoming the traditional banking model which in too many cases is no longer aligned with technologies. But, above all, is no longer aligned with the real needs of people. "

As announced on their official website, the Treasury Department of the Ministry of Economy and Finance is working on a decree to explain the crypto In particular, the decree will define how and when the "service providers related to the use of digital currency" will report their activities to the Ministry.

The decree aims to avoid any illegal activity that can be conducted by cryptocurrency, the most important is money laundering.However, compliance with the anti-money laundering laws by acting with cryptocurrencies on a professional level has already been clarified on 25 May 2017, in Legislative Decree No. 90.

The definition of "virtual currency" is explained in the Decree: "numerical representation of value, not issued by a central bank or a public authority, not necessarily linked to a fiduciary currency, used as an exchange tool for the purchase of goods or services and transferred, stored and exchanged electronically. "

Michele Orzan, Digital Leader (Europe) of the World Economic Forum and President of EuCham (European Chamber), proposes to delete the phrase "not issued by a central bank or public authority" from the definition of virtual currency, "While various states are about to publish them, and some have already done so."

The New Administrative Order, available for public consultation until February 16, 2018, proposed clear ways to denounce pto activities at the Ministry of Economy and Finance, as well as a potential timetable.

"Service Providers Related to the Use of Digital Currency"

Who are these "service providers related to the use of digital currency" exactly? As stated in the draft decree, it is any person or entity that provides professional services, related to cryptomurencies, such as use, trade, storage or conversion.

Therefore, any vendor who accepts cryptocurrency as a means of payment for goods, services or other purposes is required to report their activities to the department on time and in the format established by the decree.

If one is already operational inside the Italian border this decree comes into force, it will have to report its activities to the Ministry within 60 days of the effective date of the Ministerial order.

According to the decree, industry professionals are required to register on a special list held by the Institution of Agents and Mediators (OAM – Organismo degli Agenti e dei Mediatori ), who manages the lists of

Following the date of entry into force of this Regulation, in order to report on the activities to the department and to register to the list, it will fill out a form, as indicated on the draft decree, and send it using a special Italian certified electronic mail service (PEC).

The form requires general identification data such as surname, first name, document data, as well as the address or website of the company.

After the publication of the updated Decree on the Government Gazette, those who operate with crypto-currencies to a commercial or professional level in Italy, including sellers who accept digital currency as a means of payment, must send a certified e-mail to the Ministry of Economy and Finance.

With this information, the government will have a better understanding of the phenomenon and be able to conduct potential investigations in case of money laundering or other illegal activities.

However, Michele Orzan is not so convinced by the initiative of the inscription: "Of course, I appreciate the desire to understand the phenomenon (which could however to be carried out by some research companies certainly better and faster), it could end up with the usual Italian flaw: an additional bureaucratic demand.

Finally, paradoxically, it seems that this is happening In the previous century: forms by mail certified to the state, attach a copy of the document issued by the state itself.In 2018 it makes me smile: it is as if I was in bed with my wife, before … uh, party … I would ask him to show me the copy of my signature I affixed to the marriage. You never know … "

What will the government do with these data?

As clearly stated in the draft order, the data collected by the department, other than those used for census, will be placed at the disposal of the financial police ( Guardia di Finanza ) as well as the postal police and communications, namely the Italian police ( Polizia Postale e delle Comunicazioni ) , conducting investigations related to money laundering and terrorist financing systems.

Renzo Taffarello, expert in internationalization and innovation strategies, specializing in digital platforms and related technologies, commented, "What are the new proposals doing? They define the obligation for those who manage the cryptocurrency to register on special lists. Basically, people who are financial intermediaries or traders or others will have to introduce themselves and inform if they are part of the crypto exchange. It is obvious that the government is putting a series of obligations that are prerequisites for future tax decrees and regulations. "

Michele Orzan offers another way to find out who is engaged in cryptographic activity:

" Get rid of business, do not weigh them down. " other requests. Since soon there will be a declaration of income [in Italy] it would be enough to add a small square, to ask the question, and to check it (this would cover the majority of companies and individuals who engage in business ). In the EU there are advanced countries, like Estonia: you have to learn from the best.

The new proposal highlights the growing interest of the Italian government in the regulation of cryptocurrencies.

Francesco Nazari Fusetti, social entrepreneur, founder of AidCoin and CharityStars, is excited by the new developments:

"Regulators are moving faster than expected the world. Surprisingly, Italy also takes the crypto phenomenon seriously. For Italian companies, I believe that it is positive to have guidelines to be able to function legitimately in this new industry. "

The decree does not introduce any new taxes or unusual laws: it only asks vendors and operators in the industry to send a report to the department in order to conduct a census of activities and attacking potential criminals.

Renzo Taffarello, however, thinks that the decree will give way to other regulations:

"What we can be expected – typically, the Italian government in tax matters has a very bureaucratic approach associated with rules particularly difficult to interpret, which could constitute an obstacle to the adoption of cryptocurrency. other countries of Northern Europe and the world. "

For legal enterprises, the new decree does not imply any particular sacrifice or burden, so it must not constitute an obstacle. As far as criminal activities are concerned, particularly damaging to 39, industry, the new decree provides law enforcement officers with new tools to fight against illegal operations

"Si the phenomenon of cryptocurrency will not exhaust because of certain circumstances, it will be particularly interesting to understand its impact on the current economy. In addition, it is interesting to study how to govern and regulate this phenomenon, which, if not properly managed, could endanger the existing instruments of monetary policy. While centralization, in the common imaginary, aims to achieve quality of life objectives, cryptocurrencies point to a decentralization that, while avoiding the known limits of centralization, could involve other problems. . A phenomenon that politics must govern even before the bureaucrats or the big world corporations.

The interviews were conducted in collaboration with Lucrezia Cornèr, editor-in-chief of Cointelegraph. ]

See also  The Shady Underworld of the Box Office Empty