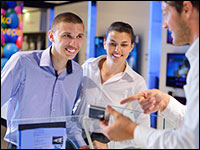 Most retailers do not have in-store technology to visualize customer information through different touch points, suggests a new study of
Kibo, "Technologies that change the way we think about brick and mortar."

Fifty-eight percent of retailers who participated in the study, released last Thursday, acknowledged that they did not have this ability.

The study was based on questions asked to 115 retail executives during an on-site benchmarking session at the Future Stores 2017 conference.

According to its findings, it appears that the majority of companies are not able to automate customer information on mobile devices or kiosks when they are present in their stores.

"In order to provide a seamless omnichannel experience to consumers, retailers must have a complete picture of all consumer activities, no matter the channel of purchase," said Kibo's managing agent , Tushar Patel.

"Nothing is more frustrating for a consumer than a retailer who has blind spots on his business," he told the E-Commerce Times.

According to the report, many retailers use a wide range of technologies to capture more personalized data from their customers.

However, 64% of retailers felt that they were only inefficient at capturing store data on customer preferences.

Only 42 percent of retailers said they had in-store technologies to display customer data across a variety of touch points.

Another key point that in-store technology retailers have adopted is personalization.

Fifty-two percent of participating retailers planned to invest in personalization technologies in the next 12 months or had already begun implementing the strategy.

However, 22% of retailers said that they had not started customizing and were not sure of having the ability to do it.

Offering more ways to put products in the hands of customers has proven to be disheartening for many small retailers.

However, more than 40% of retailers who participated in Kibo's study said their technologies would not support these services, or that they were not ready to put them in artwork.

With the exception of Amazon and Walmart, many retail titles have recently come under heavy pressure, noted Cindy Zhou, a senior analyst at Constellation Research, after SPDR S & P Retail fell. at its worst week since last December.

Thirty-seven percent of retailers who responded to a survey she conducted at Microsoft's Modern Customer event indicated that their biggest challenge was to offer a multi-channel digital-physical experience consistent with customers.

"Customers use their multitude of mobile devices to search and buy products – read reviews, ask their friends about the social – before making a decision," Zhou told the E-Commerce Times. "

The mobile shopping experience is essential, she said, but few retailers have been able to provide a mobile app that allows customers to easily see availability, to make shopping and check items easily.

A large retailer who embarked on a digital transformation project, said Zhou, is a company that has a retail presence, an e-commerce website and a catalog division – but each one is part of a separate system and they can not communicate with each other.

Personalizing in-store technology to view customer data is not as simple as one might think, observes Nikki Baird, managing partner at RSR Research.

"Yes, there are certainly gaps in terms of the need for mobile devices," she told the E-Commerce Times, but at the same time there are a lot of worries to give to employees first line.