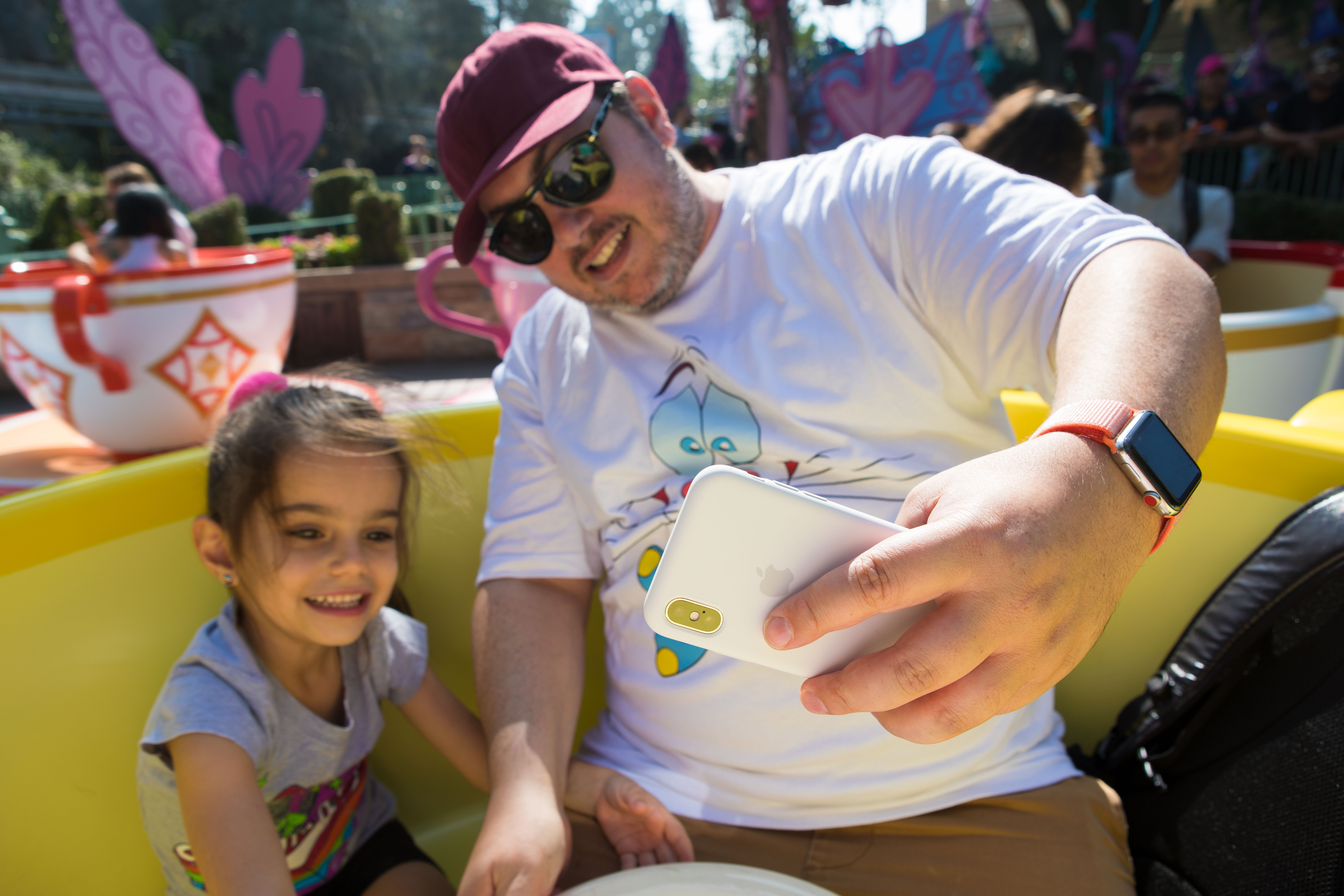 Alan Dye, who was responsible for leading the software design teams who had to decide how to handle the sensor package, said that He felt himself the most honest.

"We have this incredible True Depth camera system in this space in the center of the screen, and we have thought a lot about how to design it for that, and finally we felt really at home. comfortable with this notion of being really honest about it and allowing the content to come out in those beautiful rounded corners, "says Dye.

Dye says that Apple has considered using digital glasses. "We looked at different design iterations and considered some things that act like digital glasses if you want to, but ultimately we never really felt comfortable with this notion of culture in content. really the new screen, we love the fact that it is edge to edge.We love the way it fits.It is so perfectly designed for the overall shape and we encourage people to push the content right into the corners. "

In use, I must say, the notch is just zero problem for me. I do not give a rat ass about it. I know I will probably catch some heat but I do not carry water for Apple here. I think it is absolutely a compromise but, having used Face ID and the True Depth Camera for other things, I am ready to face it.

And beyond "dealing with" I can tell you that as one of the few people outside of Apple to have used it for more than a year. a day – you stop noticing it very, very quickly. This is a part of the display, the areas on the sides are or are not used and that's all. Major apps like Instagram and Facebook have already been updated for the iPhone X screen and they look good. Apple had to do some serious engineering to reach the corners too because the OLED is flexible.

Watch the video in the default landscape to crop and I largely forget about the zoom. The new YouTube application reminds you to pinch to zoom out so that it fills the screen and looks cool in my opinion. I think it's clean and a little futuristic. I've been waiting for asymmetrical screens that are tailor-made for their use case forever. They are in all sci-fi movies and we've all been stuck with rectangles since the success of the iPhone. I'm fine with a change.

I have (about half jokingly) called the True Depth area a "flap" in September. Since when you minimize an application, you can see that it's an entire "map" that slips from below – and the screenshots show the area filled, I'm technically correct about it. In the world of interface design of the iPhone X, there is a component that covers this area, not a notch that cuts this area. It does not mean anything but if you like completely malleable digital content to conform to a defined physicality, this paragraph was for you.

If, however, you use your iPhone for data entry or navigation or anything that is in landscape, the True Depth camera is going to be bang on your way, especially if it is on the left. No problem. If you do not mind, do not get an iPhone X. But even if you think it will bother you, I'm not sure it will really be the case once you spend a few days with it.

That is sort of the mantra of the iPhone X: Give it a few days and everything becomes much clearer.

The first day of using an iPhone X is deeply strange and cumbersome in many ways. If you have spent years manipulating a home button, you will not be able to break down those memetics in a few hours. I had to get used to sliding up, through, down and up instead of pressing the button, by tapping the button twice or typing twice and swiping.

The second day is better. Some actions already seemed super natural, like tapping on the screen to wake him up, sweep the home bar to jump directly from one application to the other, rather than raising the heavy application selector. Fast and light. Other actions such as dropping an application quickly still result in the crash of a home button that does not exist.

The fifth day is the turn. The point where the most difficult habit to break, by tapping the home button to switch from any other screen to your home screen, begins to break.

Day six is ​​when things started to get weird with my old iPhones. I've started to sweep the house button and look stupidly at the screen while waiting for it to unlock automatically.

For the record, I got the phone on a Monday and until Saturday, I was still stabbing the house button to go home. Today, a week later, while I'm writing this, I've slipped the Home button on my iPhone 7 to try and unlock it. So give it a week or two to acclimate.

Once you do, it's nice. The faster 120 Hz refresh rate of the touch screen means that every action is smooth and reacts immediately to your touch. If that was not the case, everything would break down. You no longer have time to leave your finger to leave the home button and reach the screen before acting on something. Everything must happen immediately because your finger never leaves the screen. And that never leaving the screen is so essential.

What it's like to open the phone, switch from one application to another or open another, everything starts to end. There is no more button "return home and back to the screen". It is ultra-fast and fluid and gives the impression that you do it faster.

The passage from the application to the application's action is not at all a problem on the fingers or the hand, for that matter. I know that there were super awkward spying stuff, but just slide along the bar from left to right or from right to left to swap apps. It's easy and relaxed. If you want to access the selector with the action "drag up and pause", you can do it, but I do not see any major need for it.

Grasping the control center with your left hand is hard work, and I'm still not sold on the placement of it in the upper right corner, or the fact that the controls are at the top.

When you walk with a child in one arm and you try to hang a FastPass for your next exit and you need to adjust the brightness or switch the screen or anything similar, it is almost painful to do it. And it's only slightly nicer with your right hand.

That's why I'm so glad that reachability still exists. It's incredibly useful here. This is also related to a much more intuitive activation process. You can pull the entire top of the screen down with a slight "dash down" from the home bar. Then Control Center is easily accessible with your right hand and at least not impossible with your left. Accessibility is now hidden in Accessibility, if you are reading this and looking for it.

The strongest recommendation I can make for the new paradigm "no home button" is that after a week, the usual actions of the home buttons , like the double tapping, are too heavy after just one week of use. It turns out that ten years of the button of the house was enough to allow us to move on.

Another tidbit of interface: I really like the new force-press to activate the camera on the home screen. It feels much more definitive than the "right-to-left whiplash" that could go wrong on a notification or not trigger because you have not quite hit the brink.

I took no special care to preserve the battery beyond what I would normally do, which is to try to stay away from Twitter at Disneyland (you can see that I have failed miserably enough in this regard). The temperature was in most of the 90s for the most part, which is not crazy for Southern California, but does not make any favors batteries. The reception is still pretty mediocre in many areas of the park and the radio will fetch a lot inside the rides, which leads to a bigger discharge of the battery. Despite this, and despite the fact that I shot hundreds of photos, the battery lasted all day.

I started the day by unplugging the charger around 8:24 am and skated in our hotel room around 9:11 pm at 6% in power saving mode. Not bad 13 hours 2 minutes standby and 6 hours, 4 minutes of use in such arduous conditions. It's a lot less than what I expected to do each day, but not in the parks, where the batteries are tortured. My iPhone 7 did not do it all day. The iPhone 8 Plus did, but I did not use it too heavily when I did not take comparison photos. And the battery is bigger.

Physically, the iPhone X is great. Beautiful, bright, it looks very good. It feels denser and denser like a high quality watch piece. The chrome-like stainless steel ring around the phone picks up some fine scratches but they look normal, and I tend to run without a case and scratch the junk of my phones, so what is not an alarm bell problem. The glass back always looks superb, with a multilayer backing that has a very light pearlescent sheen under the top glass sheet. I also like the fact that they tried to "bevel" the camera hump. That's what it is and it looks great with a bezel as minimal as possible. From the front, well, you get the screen and you get the table from the notch / pane / True Depth.