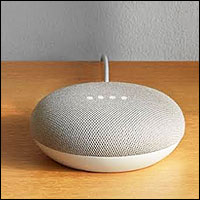 There is a lot of excitement about all the new Artificial intelligence technology striking the market – such as the Amazon Echo and the Google Home smart speakers, among many other products. However, there is also a growing concern about how these devices can invade our privacy.

These AI devices are designed to be used in all our homes – and despite the assurances given by companies, some people are afraid to be listening to every word we utter. Surely they have to listen when we want them to give us answers or perform tasks, but what happens if they listen at other times as well?

To what extent do they invade our privacy? Even in the worst of cases, it could depend on who you are and what you consider to be an invasion of privacy.
For some, having a conversation while a smart speaker is listening might not be different from having a discussion in a public place.

However, most people talk about private matters in private. If an AI device is sitting right next to us and perhaps listening when we do not know it, the space is no longer private. Worse still, it is possible that the device records everything – despite assurances from companies – which would prevent us from distancing ourselves from what we said.

Having a conversation next to an AI device is different than having one in public. In public, there is rarely anyone on the periphery who cares about what you say, and it is highly unlikely that anyone secretly records every word you have uttered for potential future use.

See also  Retailers (Including the Amazon) Attack Fraud on Return

Devices such as Amazon's Amazon Echo and Google-Assisted Home may be able to hear, record and store forever every word we utter, even if it is not so that they are supposed to work. However, how can we be sure that what we say will not come back hurting us in the future?

Can we trust companies?

The discovery of a first examiner of
A hardware vulnerability affecting a small number of Google Home Mini devices – those distributed during Google events prior to its general release – has recently brought this issue to light.

Google quickly turned off the feature that allowed involuntary spying and removed all registered information from its servers. It removed the feature permanently, so there would be no question of malfunction on any of the units delivered to consumers.

However, the incident has raised huge privacy alarms, with people like Kurt Knutsson, the CyberGuy, telling Fox News viewers that the Google Home Mini is recording everything, 24 hours a day, 7 days a week. / 7. If that were true, it would obviously not be acceptable to many people. He also raised concerns about Amazon Look, a camera-equipped Echo camera, which aims to take pictures of people modeling their clothes so that they can decide what to buy or carry.

The problem, according to the CyberGuy, is that the Echo Look would probably be placed in the user's room. I do not know about you, but for me, it's as scary as that. And if the look of echo had to work badly? Do you really want pictures of yourself in various clothing or undressed states stored on Amazon's servers?

How can we trust these companies to protect our privacy while many can not even protect their own data? All this innovation seems to cross a lot of lines. AI is great in some ways, but is it really worth sacrificing your privacy? It could have an impact on you for the rest of your life, so think about it seriously.

But wait, there is more

The Echo of Amazon and the Google House are not the only points of privacy risk with respect to the AI. There is now a technology capable of recording every shot on a computer keyboard. Companies have the ability to record very often emails, SMS and voice messages.

It's not just computers that pose risks to privacy. Each wireless phone too. Cable television and pay television services can record our listening habits. Some car navigation systems can record all the places where we go and where we stop.

Our privacy crumbles, little by little, with every new technology and every new device. Sometimes it may seem like a machine is monitoring every step we take, every day, and that we have more privacy.

AI is the future, but we must protect ourselves, ensure our security and privacy, as this becomes a growing factor in our lives. The responsibility to protect consumer privacy ultimately rests with the technology industry, but the pressure for that to happen must come from the user community. It's up to us to start making noise in order to protect our privacy.

See also  Threats to cybersecurity Courier companies must not ignore

12 new commercial books for 2018
For e-commerce, use targeted search ads or display
How to find a logo that speaks volumes of your business
Advertisements
-- Advertisements --