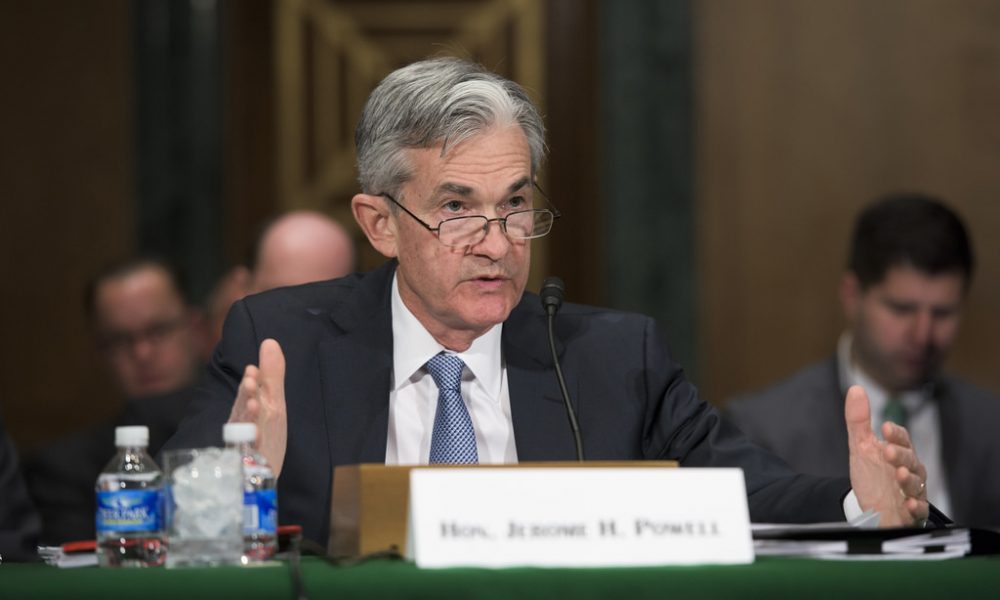 Stock markets rise or fall on sentiment, earnings and economic data. While the first push after the US presidential election was driven by sentiment, the markets continued as the flow of data stabilized and improved in the United States and around the world. However, at current levels, US equity markets seem expensive relative to historical averages.

Nevertheless, hopes for a tax reform have kept markets buoyant. To what extent can these tax cuts add to the markets and what is the risk if the reforms are diluted or simply do not see the light of day?

However, there are differences of opinion as to whether these figures include the benefits of tax reductions or not. If the tax benefits are incorporated, then to what extent.

The most bullish analyst of the street, Morgan Stanley's US stock market strategist, Mike Wilson, estimates that about $ 9 of $ 145.2 in earnings projection is based on the benefits flowing of a tax reduction. On the other hand, the most bearish analyst, Mike Purves of Weeden & Co., estimates that $ 14 per share comes from tax cuts.

Analysts expect annual earnings per share to rise by $ 15 if corporate taxes go from 35% to 20%.

However, Wilson only accounted for $ 9 in benefits from tax cuts. Therefore, we will have to add another $ 6, which gives us a figure of $ 151.2.

Factset data show that the C / B ratio of the five and ten year average expected profits of the S & P 500 is 15.6 and 14.1, respectively. Therefore, even with the most optimistic earnings scenario incorporated, the S & P 500 is currently trading above its past averages.

However, the fact that its current valuations are above historical averages will not cause a correction in the markets. But, a failure to pass the tax cuts can it begin a fall?

Again, we will consider the most optimistic scenario. If Republicans fail to pass the tax reforms, the projection of profits for next year will drop from $ 9, to $ 136.2. At this level of profit, the S & P 500 is currently trading at a P / E ratio of $ 18.9, which is starting to appear expensive.

As the chart from yardeni.com shows, the S & P 500 is already trading at a price / earnings ratio above 2007. This confirms that we do not have the comfort valuations behind us. However, we are still far from entering a bubble territory compared to the forward P / E of 24, recorded during the heights of the Internet bubble. As a result, an accident might not be off.

Again, there are two schools of thought. While it is said that a failure in tax reforms can easily plunge the S & P 500, others believe that the stock market should not fall more than 5%.

Treasury Secretary Steven Mnuchin believes that tax reforms are in full swing. In a podcast with Politico, he said: "As far as we get the tax deal, the stock market will go higher, but there is no doubt in my mind that if we do not do it, you will see a reversal of a large part of these gains. "

However, Credit Suisse and Morgan Stanley differ because they do not see a stock market crash even if tax reforms fail.

"The market has rewarded companies with high effective tax rates for only three weeks after the elections, but not since," wrote Jonathan Golub, the principal equity strategist of Credit Suisse in the United States. "For this reason, we do not think the shares would be threatened if a deal is not concluded," reports CNBC.

In a memo to his clients, Morgan Stanley painted three different scenarios without tax cuts, modest cuts, and substantial cuts. 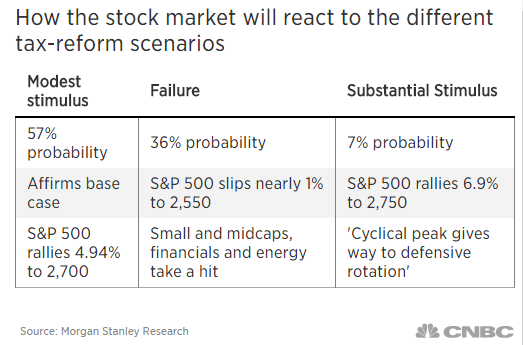 Morgan Stanley estimates that markets will only fall by 1% if tax cuts do not occur.

What do we believe?

We believe that the recovery of the US market over the past year has been motivated by the hope of fiscal stimulus and tax reforms. These have kept the feeling positive. As a result, the markets grew on favorable economic data in the United States and around the world and did not lose ground even when the news was unfavorable.

However, after failing to repeal Obamacare, if Republicans fail to pass through a significant fiscal stimulus, the sentiment will be hacked.

This will make markets vulnerable to sharp declines in adverse news because the floor of reforms and increased earnings will be lost.

On the other hand, if the tax reforms are announced, the markets will surely increase in the short term, but the recovery should not last more than a few weeks. Usually, experienced traders buy the rumor and sell the news. We expect the same thing to happen once the reforms are announced.

Markets will correct and attention will be focused on the effects of the stimulus at this stage of recovery, which has been questioned by many economists. The Federal Reserve may also have to tighten faster than expected, which could offset some of the effects of rate cuts.

Buy the rumor of a substantial tax break. However, once the cuts are announced, please reserve profits in the rush of purchase that follows.

On the other hand, if tax cuts do not materialize, keep the shopping list ready to enter on any drop, which is closer to 8% at 10%.

Bitmain will "burn" 12% of Txn Bitcoin Cash charges, call other miners to follow
The South Korea Bill insists on the legalization of new country offices after the ban on registratio...
France authorizes the trading of unlisted securities on blockchain platforms
Advertisements