Where venture capital has peaked 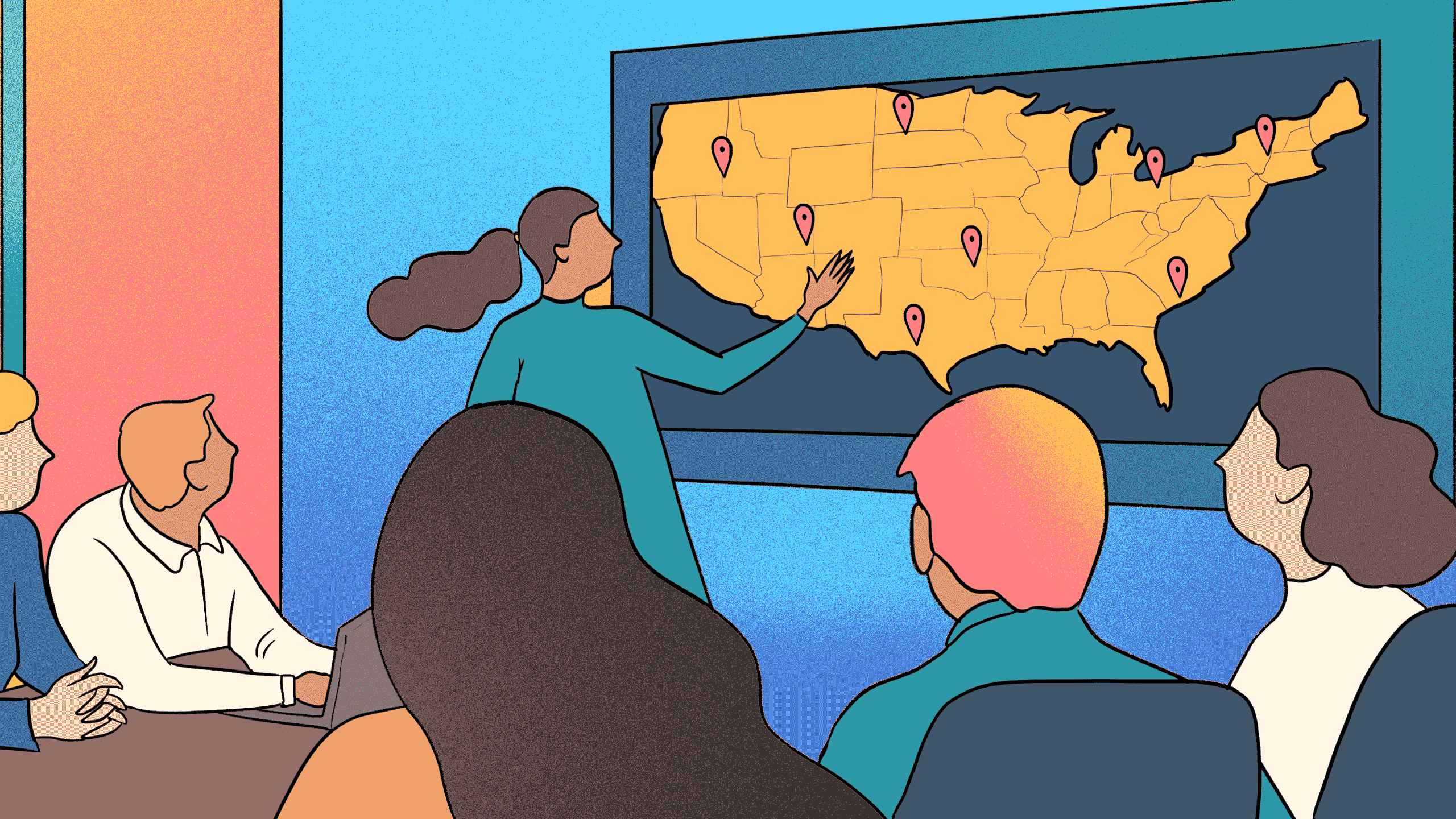 Jason Rowley is a venture capital and technology journalist for Crunchbase News.

"The Peak Start" is an expression that no doubt strikes terror in the hearts of entrepreneurs and start-up investors.

But saying "peak startup" is not the same as saying that the market is at the peak of a bubble. Indeed, with SoftBank leading to late valuations to the chagrin of IPOs, global phases in the phase of gradual startup and stabilization phase stabilize, we do not see the imminent implosion of the market for private equity .

Peak start simply means that the market is running out of steam for this cycle. Despite the fact that dollar deals and volume are reaching or nearing global post-dot com bubble summits, there is a chance – at least for this cycle – that the best days of the US emerging market are behind. And that's what we are going to examine here: a quantitative and qualitative case claiming that the spike of startup has come and gone in America.

The tarnished star of Texas VC asks a question

Readers of Mary Ann Azevedo's report on the state of venture capital investment in Texas in the third quarter of 2017 may recall the following chart: 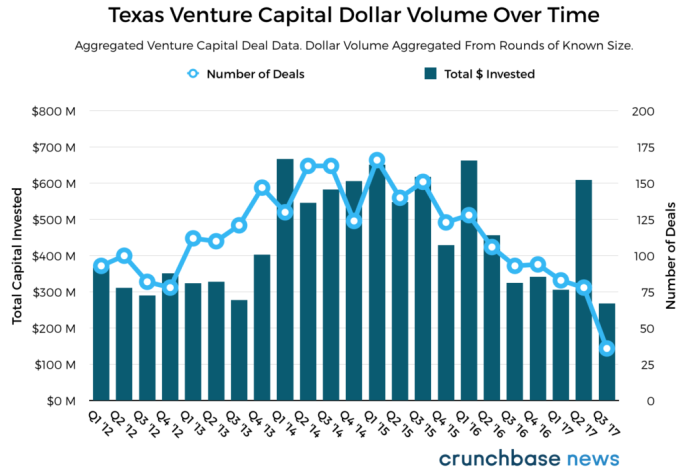 It shows that, at the time of writing this report, the last full quarter of 2017 marks a multi-year trough for both the number of venture capital transactions and the amount of money raised in these transactions. This was not the kind of chart to inspire hope to investors or founders.

But is Texas, the Lone Star State, alone? Or is it part of a larger model in the largest venture capital markets of the United States?

Spoiler Alert: This is the last one, and for startups and investors, this could mean problems.

We believe that there are two parameters that paint a bear market for the US start-up market during the review over the seven-year period between the first quarter of 2012 and the end of third quarter 2017: The total number of VC transactions here. And in a future article, we'll look at the decreasing percentage share of the VC dollar volume received by startups and startups.

A decline in the overall volume of transactions

From a venture capital point of view, there are two "first-order" indicators that we could examine to assess the overall health of the US start-up market: the volume of transactions and the volume of money. It can be said that the number of transactions is the best barometer, because, as we have seen recently, a handful of extreme rounds – consisting of last minute transactions at nine or 10 digits – can give the lump sum. impression that the entire market is oscillating higher.

Returning to Texas, Azevedo looked at the investment activity in the Lone Star State's startups from the first 2012. On the occurrence, Texas is also One of the top five states for start-up trading volume during this period, so we decided to compare it to the other four: California, New York, Massachusetts and Washington. Collectively, these five states account for just over 65% of the more than 55,800 known venture capital deals with US-based start-ups in the 2012 – Q3 2017 period we analyzed.

Here is the painting: 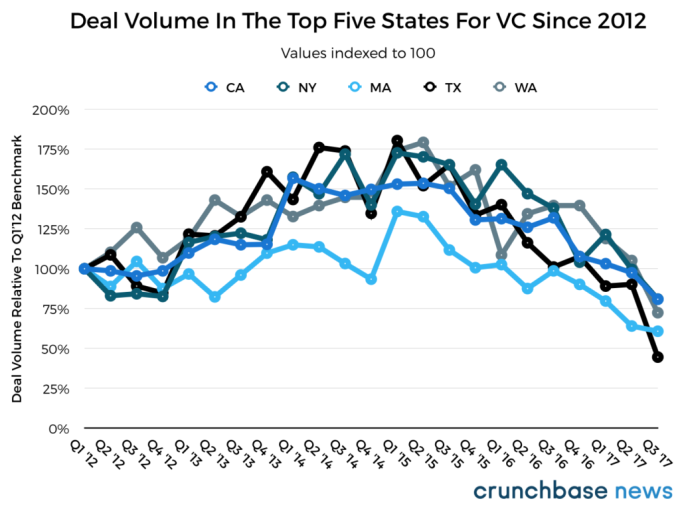 The set of the top five markets by volume of business has seen a marked decline in the number of deals concluded since the attainment of a local maximum by the beginning of 2015. This should result in directional precision. After all, in 2014, Uber raised two massive rounds: a $ 1.4 billion Series D for a $ 17 billion valuation and six months later a $ 1.2 billion E Series at an incredible value $ 40 billion. It was a heady day, indeed.

But, could you say, these are just the most important markets. So what about the bigger picture? To address this, we have aggregated 55,800 transactions extracted from Crunchbase data by geographic region, as defined by the US Census Bureau. We found a similar model: 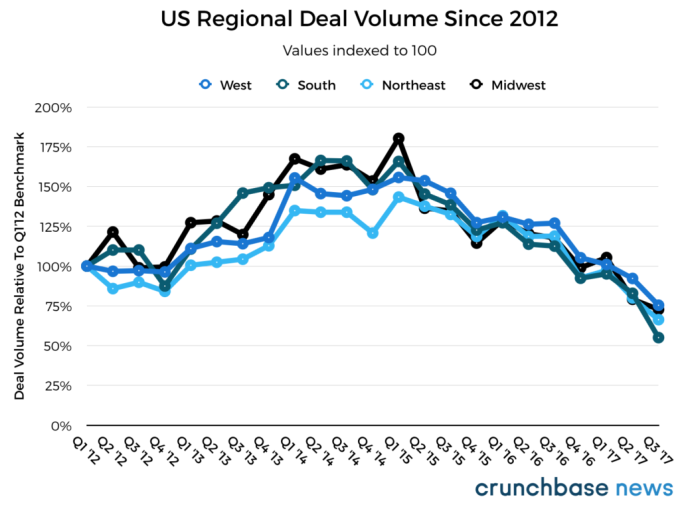 As we saw in the old chart, the volume of transactions peaked in early 2015 or around this date, as well as the progressive reduction effect observed in the individual states.

Even though we are on flat ground, we have still descended a hill

True, it is quite possible that this is attributable to sampling bias of one variety or another. Indeed, by making projections on CR activity, Crunchbase takes into account that it may take a long time to get information on certain transactions (especially seed and cash agreements). angels) to integrate them into the database. The charts above only use reported data – the offers that are already in the database – and, as more offers are added over time, the numbers will increase. . But even in Crunchbase's projections, which only go back to the first quarter of 2013, the projected US transaction volume for the third quarter of 2017 is fundamentally stable compared to the start of these projections.

In other words, the US VC market is more or less at its level of six or seven years ago, at least as far as the volume of transactions is concerned. That means we climbed a hill, peaked in the first quarter of 2015, and climbed up the hill for at least a flat lot and perhaps a valley. We will see what happens in the coming quarters.

The quiet passing of the peak start

Let's go back to what motivated our look at the startup data across this goal: Jon Evans' TechCrunch article of the past weekend. In this paper, he made an uncomfortably convincing case that the peak start came and went.

He suggests that "because we have all experienced massive material revolutions around the world – the growth of the Internet, and the adoption of smartphones – we mistakenly assume that a Another is on our doorstep, and again, some kids in a garage can write a little software to enjoy it. "

The first wave of companies he quotes, Facebook, Amazons and Airbnbs from around the world, has grown in scale because the Internet has taken over. magnitude. The second wave – Snap, WhatsApp, Instagram, Uber – is riding on the back of mobile dominance.

The third wave? He rightly observes that VCs and the technical press like to talk a lot about AI, drones, autonomous cars, VR / AR and a host of other sensational technologies. But as there is no predictable path to widespread adoption (at the scale of all those who buy smartphones in the mid-2000s) because of the costs of building these systems and the shortage talent, this third wave a novel by Cormac McCarthy, no country for start-ups.

Market opportunities for new mobile and internet startups are dwindling. The "greenfield opportunities" that MBAs often talk about have often been left to be abandoned. The border? Dominated by giants. The peak period of this cycle may have arrived and passed.